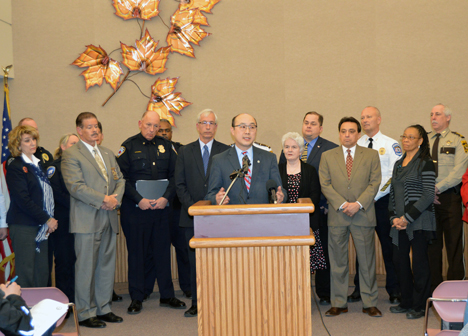 On April 12, the Ramsey County Board of Commissioners passed a resolution to launch a countywide initiative to better identify, inform and improve community response to sexual assault victims.

Led by the Ramsey County Attorney’s Office along with Saint Paul – Ramsey County Public Health, local law enforcement officials and community advocacy groups, Ramsey County: A Start by Believing Community is a public awareness initiative designed to change the way in which the broader community, law enforcement, prosecution, and criminal justice partners respond to sexual violence. The goal of this initiative is to create a culture where victims feel more empowered to report their abuse and to develop an infrastructure of response, which improves outcomes for victims – one response at a time.

Current estimates suggest no more than 20 percent of sexual assaults will be reported to law enforcement and less than three percent will result in the conviction and incarceration of the perpetrators. As an example, data shows that two thirds of sexual assault cases investigated by local law enforcement in Ramsey County are never even presented to the County Attorney’s Office for charging consideration. Primary reasons for victims not reporting a sexual assault include fear of retribution, embarrassment or shame and even a concern that their stories would not be believed.