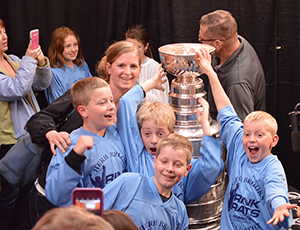 The Stanley Cup dropped in on Rink Rats at Vadnais Sports Center last month. Rink Rats is a free program provided by the Herb Brooks Foundation that teaches kids the game of hockey. NBC Sports was on-site to film the program and surprise the kids, and volunteers with a visit from Lord Stanley's Cup. Watch the story during tonight's Stanley Cup Finals game. It will air during the second intermission on NBC Sports.