Larry Cohen has the unique distinction of holding the highest office in all three branches of local government in Ramsey County. He was chair of the Ramsey County Board of Commissioners, mayor of Saint Paul and chief judge of the Ramsey County District Court. During his career as a lawyer and public official, he recognized that our city and region thrive when all voices are heard and represented, and he affirmatively lifted up those voices through innovative policies and leadership.

The Cohen Recognition Project serves as a welcoming space for people coming to or passing by the Saint Paul City Hall - Ramsey County Courthouse. The project reflects Cohen's belief that diversity adds vitality and richness to our community. The public art installation creates a vibrant, welcoming public space where people from all backgrounds can come to recognize and celebrate Saint Paul’s rich immigrant and Native history, and diverse and inclusive public leadership.

The project is located in the plaza at the southeast corner of Saint Paul City Hall - Ramsey County Courthouse near the intersection of Wabasha St. and W. Kellogg Blvd. The project overlooks the river bluffs and Saint Paul’s west side, historically home to many of Saint Paul’s immigrants.

View the tabs below to learn more about the process of creating the Cohen Recognition Project, supporters, descriptions of the project components, and artist information about Marjorie Pitz, the landscape architect who led the design process, and other contributing artists.

View a recording of the unveiling event

Resolutions were passed by the City of Saint Paul and Ramsey County to create a recognition project upon the plaza at Saint Paul City Hall - Ramsey County Courthouse where Cohen served the public for decades.

Fundraising began for public artwork. Otto Bremer Foundation supported the idea of making the plaza a vital and welcoming place with integrated public art. Forecast Public Art was hired to help find the artist/landscape architect team for the project and facilitated a request for qualifications and selection process.

Pitz created three concepts for the plaza, which were approved by the community committee to share with the public. Presentation boards and models were prepared for each concept, as well as a PowerPoint presentation and a Facebook page. Display boards were set up at city hall and the Landmark Center. Presentations were made at Rondo Community Library, Neighborhood House, Friday Group, and city hall. A survey was created to gather feedback from the community.

Recent events in the Twin Cities emphasize that advancement of social justice, for which Larry Cohen fought for his entire career, is ongoing and needs much more work. The project was seen as a way to link the past and present and to make the plaza welcoming and inclusive for all residents and visitors.

Major support for the project was provided by the Otto Bremer Trust, Ramsey County, the City of Saint Paul Cultural STAR program, the 2nd Judicial District, the Cohen family, Dr. Benjamin Y. H. Liu, the F.R. Bigelow Foundation, the Saint Paul Foundation, and the Hmong 18 Council through individual contributors. Thank you to the following supporters of the project:

The goal of the Cohen Recognition Project is to honor the themes of diversity and inclusion that Larry Cohen promoted during his career and create a vibrant plaza that welcomes and celebrates our diverse community. An example of the work celebrated by the project is Cohen’s work with the Hmong community. Like all immigrant groups, the Hmong community brought to Saint Paul valued culture and a spirit of entrepreneurship. However, the established community did not always welcome these immigrants. Hmong leaders reached out to Cohen, and he reached out to them, to form bonds that would improve relations and find ways to honor and include the positive Hmong traditions into governmental systems and the broader civic culture.

As a judge, Cohen identified that these new immigrants were not properly represented in the court system due to language barriers. He was the primary driver of a new interpreter certification program. Judge Cohen joined the community, regularly attending meetings and celebrations. He gained their respect and was made an honorary elder in the Hmong Community. He identified and helped to find new and culturally appropriate ways to address domestic abuse and violence. Working with Harold Gatensby from the Yukon, Cohen established a Circles of Peace program. Judge Cohen was awarded the Peace Award by the Minnesota Department of Corrections for this work.

Concept: Circle of Doves and Light

Three components are woven through the plaza in various ways, surrounding the art deco flagpole:

The plaza has an original 100 foot tall art deco flagpole constructed in 1931. Two large planters faced with polished black granite date from 1991 and circle the flagpole. The building’s basement extends beneath part of the plaza, and a large electrical vault exists below a planter.

The flag of the United States symbolizes the democracy, equality and freedom for all. These are not felt equally by all and these inequities drove drove Larry Cohen to work for fairness and inclusion his entire career. On this plaza, the flag commands the physical heart of the plaza, and reminds us to include all people as we improve equity and justice in our country.

The theme "Circles of Doves and Light" is represented by several new components. 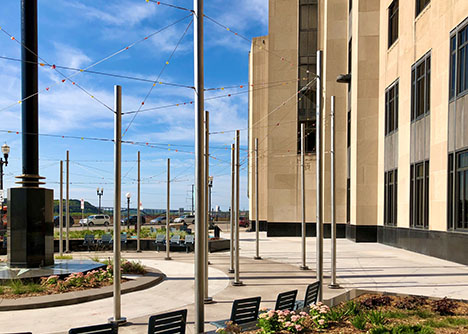 Gleaming poles radiate about the flagpole and pull your eyes skyward to the flag. The poles complement the stainless steel windows and verticality of the Art Deco architecture of City Hall.  A network of cables overhead suspends beads that catch light. The beads and cables represent the interconnectedness of our community that  strives to unify and support all. Here, the pergola and the community circle the flag to embrace its meanings: freedom, equality, and democracy.

The pergola’s welcomes all visitors with its pleasing enclosure and the sparkles of light. It's circular form recalls the circles of peace and restorative justice programs that Judge Cohen implemented. .

Beneath the pergola, seating has been added to welcome visitors and provide comfort. The benches ring the flag and visitors face each other around the circle as equals.

Bryan Ethier, a Saint Paul artisan, created the glass beads with help from his talented team of local glass artists. JunoWorks fabricated and installed the pergola. 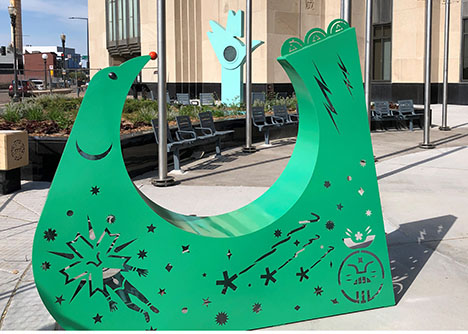 Four dove chairs portray the concept of circles, doves and light. A circle of space invites visitors to sit inside and feel enveloped. The dove looks back towards its tail, to learn from the past, gain wisdom and to find peace for the future. Light pours from the dove chairs like lanterns at night to welcome visitors to a safe haven.

The dove chairs are perforated with designs that tell cultural stories. These stories are from Native-American, Black, Latinx, and Hmong cultures and remind us of our first community as well as people from all around the world who strive here for freedom, democracy and opportunity.

In honor of Larry Cohen, who often mentored diverse people in whom he recognized great potential, Pitz invited four emerging artists to create the graphic stories upon the dove chairs. 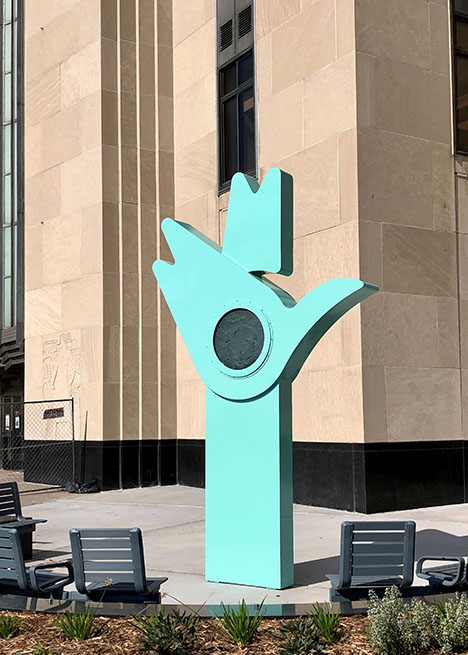 This sculpture can be viewed in two ways. One is an open hand raised in welcome saying, “I matter, please listen to me”, as well as, “I see you, and greet you with warmth and peace”. The sculpture can also be seen as a dove in flight, with the fingers being the wings. Raised open hands and doves are welcoming symbols of peace.

Pitz was inspired by Le Corbusier’s peace monument in Chandigarh, India, which combines imagery of a bird and a hand. Le Corbusier’s monument symbolizes “the hand to give and receive; peace and prosperity, optimism, and the unity of mankind.”

The split-fingers of Le Corbusier's monument reminded Pitz of Spock’s greeting in Star Trek. Exploring the genesis of the Vulcan’s greeting of peace, she discovered that Leonard Nimoy invented Spoc’s hand gesture from a ceremonial gesture made by rabbis to express “Shalom”.

The slight irreverence of Nimoy in transforming a religious hand gesture into Spock’s sign “live well and prosper” matches well with Larry Cohen’s irreverent wit and his Jewish upbringing. The dove in hand sculpture utilizes the split fingers of Spock’s greeting, and layers them with the grace of a dove’s form.

At the heart of the dove in hand is a bas-relief, cast glass window lit from within. The window reinforces the concept “Circles of Doves and Light”, and its luminous glow suggests eternal light. This light is a sign of hope that we never forget the values of justice, equity and inclusion that Larry Cohen worked for his entire career. The glass was sculpted by Pitz and fabricated by Cast Glass Forms. JunoWorks fabricated the dove in hand sculpture and lighting was designed in partnership with Michael Cohen of Schuler Shook. 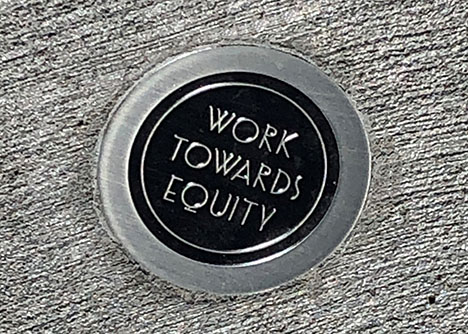 Larry Cohen was a humorous and friendly man who saw value and interest in every soul he met. Every person had an interesting story that Cohen wanted to learn, regardless of their status, education or wealth. Larry Cohen wanted all people to be respected and valued, and he believed that when community diversity grows, we enjoy greater vitality, resilience and cause for celebration.

Medallions embedded into the plaza floor identify leadership qualities that guided Judge Cohen’s life. The medallions represent universal themes and challenge us to compare our ethics to those of Larry Cohen and other leaders. Cohen’s path reminds us to be inclusive, supportive and proactive to truly welcome all residents into our community.

The number of medallions is seventeen, and this is significant. Mayor Cohen led the creation of 17 districts within the City of Saint Paul, giving neighborhoods a new kind of voice in local government that didn’t previously exist. District councils level the playing field and increase equity by giving equal powers to all neighborhoods.

Are you interested in community progress? Equity and social justice? Learn from Larry Cohen’s leadership abilities and ethical values and see how to become more effective in the pursuit of social justice. Can you follow in Cohen’s path? 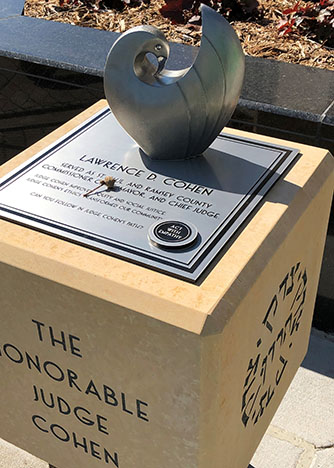 A stone column marks one end of Cohen’s path on Kellogg Blvd. This has black granite below and limestone above that were both quarried in Minnesota. Paul Harvey, a renowned bird sculptor from Hampshire, England, created the dove sculpture upon the top of the intro podium.

Marjorie Pitz began her career as a landscape architect, and swerved into public art the last 15 years of her 45-year career. She loves the intersection of art and land, and strives to create places that welcome people and tell stories. Pitz's goal is to blend art, design and landscape architecture so the boundaries between them dissolve.

Learn more about these artists and their work