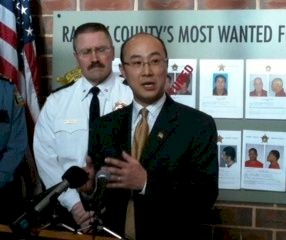 John Choi was sworn in as the first Korean-American chief prosecutor in the country in 2011. Since taking office, John has become a state and national leader in progressive justice reform, working with public officials and impacted communities to reimagine justice and the role of prosecutors. John’s innovative approach to holding abusers accountable, while working collaboratively with advocacy agencies to help victims, has transformed the way government intervenes in domestic violence and sex trafficking in Minnesota. John is now determined to do the same for victims of sexual assault. In addition, John has been a champion of raising boys and engaging men to prevent violence against women and girls; successfully advanced legislation to reunite families when it’s in foster children’s best interest; developed the use of lethality assessments and GPS technology to keep domestic violence victims safe; increased second chances by diverting people before they are charged; successfully advocated to reform state drug laws and reinvest savings in community-based solutions; and established a Veterans Court. John serves on the boards of the Minnesota Coalition Against Sexual Assault and Mitchell Hamline School of Law, and Law Enforcement Leaders to Reduce Crime and Incarceration. He is a past president of the Minnesota County Attorneys Association and a past trustee for the Women’s Foundation of Minnesota.

John received the 2015 Minnesota County Attorneys Association Award of Excellence for his innovative leadership in better prosecuting sex traffickers and helping trafficked children. Previously, John served as Saint Paul City Attorney (2006-2010) and spent a decade in private practice. John holds a bachelor’s degree in Psychology from Marquette University, a J.D. from Hamline University School of Law, and was a Humphrey Fellow at the University of Minnesota.